There are different ways to transfer photos and other media files from one phone to another. Most Android powered phones should allow you to direct export and import photos via USB. Data transfer via USB is easy and intuitive. To do that, simply connect up the first phone to computer via USB cable, then export photos and videos from the phone to computer; connect the second phone to the same computer using USB cable, and import photos from computer to the new phone. You can also copy photos between mobile phones via Bluetooth or Wi-Fi Direct. These two methods can help you exchange data wirelessly without any cable, or a computer. Many smartphone users should have already know how to share data between phone via Bluetooth. Thus we will not introduce you how to do the data migration from your phone via Bluetooth. We will talk about how you can transfer photos from Samsung Galaxy mobile phone via Wi-Fi direct in this guide. It is as easy as Bluetooth file transfer on mobile phone, but much faster than Bluetooth data transfer, ideal for photos transfer, video transfer and other other heavy media files moving for Android phone users. For bulk media and other files migration between phone when you upgrade phones, the easiest way however would be using a professional mobile phone data transfer tool. For example, you can refer to this step-by-step guide to transfer photos and videos between Samsung and Lenovo mobile phones.

How to transfer photos from Samsung mobile phones via Wi-Fi Direct?

Wi-fi Direct is a built-in data transfer and share support in your mobile OS. To use it to share data on your Samsung or other Android mobile phones, you need to firstly turn on this feature from your phone settings. No app or downloading required. Check out this tutorial to enable Wi-Fi direct on Samsung mobile phone and make two mobile devices connected via Wi-Fi Direct. This is very easy, quite like you connect up two mobile phones via Bluetooth.

Now open the Gallery app on your Samsung phone, long press on the photo you like to move, you can select two or more photos from your Samsung mobile phone. See below screenshot.

When you have picked up all the image files, touch the Share icon at the top tool bar, a file sharing selection screen appears on your phone screen. You can see options like Bluetooth, Email, Wi-Fi Direct and so on. 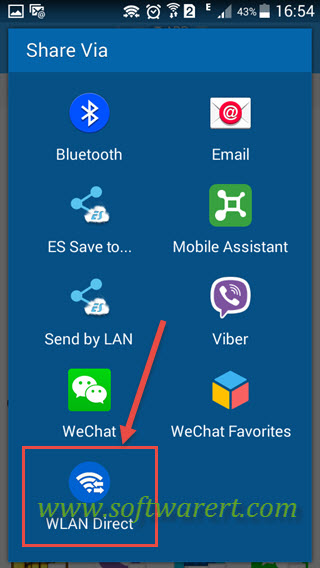 Choose Wi-Fi Direct, then a new screen pops up where you can select the target Android phone and send the selected files to it via WiFi direct.

Photos copied from Samsung or Android phone to another via Wi-Fi direct will be saved on the other phone. You can open the Gallery app on your phone and find it in the ShareViaWifi or Download folder.

Wi-fi direct can help you exchange many other files and documents from one phone to another. Except pictures, you can also share videos between mobile phones via Wi-fi Direct. You can even transfer contacts between Samsung Android phones via Wi-Fi Direct. For a more comprehensive and easier file migration solution, we highly recommend this tutorial to transfer data from Samsung to Lenovo phone. It works with a lot of file types, including contacts, text messages, photos, videos, music, apps, app data, calendar, call logs, etc. It can help you copy all your personal files between most smartphones, such as Samsung, LG, HTC, Motorola, Nexus, Lenovo, Huawei, ZTE, Xiaomi, iPhone, Nokia, and so on.